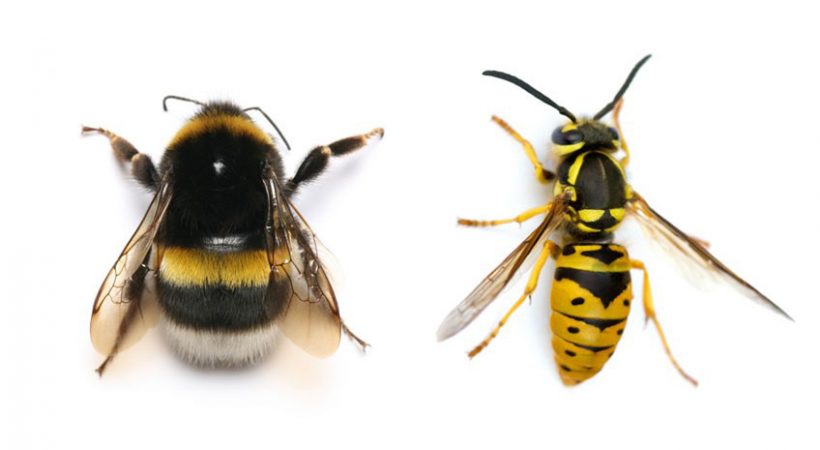 Bees are flying insects and are related to ants and wasps. There are about 16,000 species of bees. The best-known species are western honey bees because they produce the widely known honey and beeswax. Bees and wasps look almost similar but on a closer look, they are different.

Bees and wasps could also be mistaken for a European hornet for their peculiar similarities. The European hornet is a large brown and orange insect with dark wings one and a half (11/2) inch long. Like bees and wasps, it stings when threatened in or outside its nest. More like a wasp when in danger produce pheromones to alert the rest of its family, hornets also work together to defend their nest against anyone who comes too close to it. They are also predators that capture large insects such as bees, grasshoppers, to feed their developing larvae in the nest.

Comparison between bees and wasps

Bees and wasps sting people very fast when close to the skin. When they sting, the sac pumps venom into the tissue and the bee leaves a stinger that injects venom into the skin. After two to three days after a sting, the pain subsides and swelling reduces. Bees and wasps sting are treated the same way. Most stings could be treated with methods and products that help manage discomfort without a need for medical attention if not fatal. Some of the methods and products are stated below:

However, it is good to stay with a person that was stung to watch out for reaction because some bee or wasp stings can be fatal and may be life-threatening which could cause various types of illnesses. For example, the sting of a bee or wasp could cause anaphylactic shock. When a person stung is allergic to the sting of a bee or wasp, there may be a life-threatening reaction called anaphylaxis. As a result, the immune system releases lots of chemicals and this can lead to anaphylactic shock.

When in shock, the blood pressure drops and breathing becomes difficult because of narrowed airways. Paleness, difficulty swallowing, vomiting, weakness, wheezing, scalp, hand, or face tingling are the other symptoms of anaphylactic shock. In this situation, medical attention is needed immediately to avoid further complications such as brain damage, heart attack, and kidney failure, the worsening of pre-existing medical conditions in a person or even death.

Bees and wasps have different physical and behavioral characteristics but they both sting. The sting could be painful and mild depending on the species of bee or wasp that stings a person. The sting could be treated without visiting a doctor unless it is fatal. In fatal cases, medical attention should not be delayed to avoid other severe health complications or death.